This year’s Rabbit Awareness Week is focusing on environment. It’s highlighting that housing a rabbit in a single hutch is not enough.

The most common mistake by owners is giving their rabbit a small hutch or cage that’s available to them through high street stores however, this is normally small and cramped housing that isn’t suitable for most animals. There is a clear lack of publicly available housing environments that meet the minimum RWAF standards.

The rabbit’s environment must be a living area consisting of a single enclosed area of at minimum 3m x 2m by 1m high. This can include the sleeping quarters and makes up a footprint (accessible area of the ground or floor) of 3m x 2m.

It’s important for the rabbits that this 3m x 2m footprint is in a single block of space because it allows them to display positive behaviours, for example, running rather than just hopping.

This level of space will allow a typical rabbit enough space to complete three consecutive hops, and to stand up on their back legs. For some larger rabbits, it may be worth considering even bigger environments. Within the rabbit’s environment, basic equipment is needed such as a litter tray, food bowls full with water and access to hay and enrichment.

As mentioned above, it’s important that rabbits also experience enrichment within their environment to keep them stimulated. Some ideas include having toys like stacking cups which allow treats to be placed in each layer, which encourages the rabbit to use natural behaviours such as foraging and gives the mental stimulation. You could also scatter your rabbit’s food in their hay to allow for that natural foraging behaviour too.

Another enrichment idea is to have a tunnel that can be used to run through and even add some height such as a box for the rabbit to jump on. Chew toys are great too as it’s one of their main, natural behaviours so including willow balls or even plain, cardboard boxes, old egg boxes or toilet roll holders filled with hay will go down a treat. 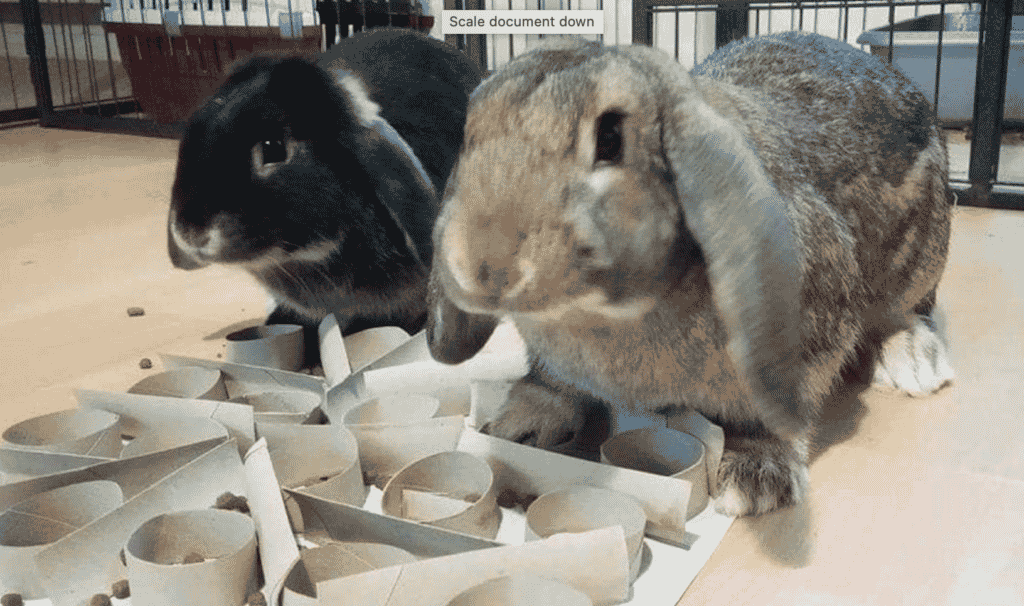 When it comes to hay feeders there are various options that you can use from garden topiary balls through to empty wooden crates or plastic storage boxes. We just always recommend that hay is regularly topped up and that your rabbit is getting at least its body size in hay daily.

Our furry friends can be very social animals and need a bonded rabbit or multiple bonded rabbits. This allows the rabbits to mimic their natural behaviour from one another and strive from being together in bonded groups.

Space is a very important focus within the rabbit community and as a charity were always trying to get the message out there of the minimum space required. Any questions regarding space, please get in touch via or contact form or social media.